So, you have (or want to have) EmuNAND! Wonderful! What is EmuNAND good for?

EmuNAND stands for emulated NAND, and basically you could think of it as having a second operating system for your console stored on an SD card. Once you have an EmuNAND setup on your system, you have a choice of which version of your system you want to boot into. Either the default stock internal NAND inside your Switch (SysNAND), or the emuNAND side of the device which is usually located on your microSD card.

- via How to install Emunand on your Nintendo Switch: Play games online without being banned

The benefits of EmuNAND aren't always obvious, but some benefits can include

The initial confusion with the link between SysNAND and EmuNAND possibly stems from when EmuNAND is created--it is a direct copy of SysNAND at the time of creation.

However, this is the only time the two will be the same! Any changes done on EmuNAND will not be reflected on SysNAND. This is by design, and can be a good thing! If you want to keep both the same, you will have to go through what ever changes you made on one side with the other.

So what does that mean for ACNH cheats / edited save files?

Great question! When cheats are done on EmuNAND, ban risk is nil if you keep all hacks and cheats confined to EmuNAND. This is good, because that means you can do whatever you want in your game without Nintendo taking away your ability to play with others on your clean SysNAND.

But, if your goal is to go online with cheats (ie, hacking in items in ACNH, editing save files with NHSE, et cetera), cheating on EmuNAND is pointless. To get cheats onto SysNAND, you will need to move your hacked/cheated save file with SysCFW (or CFW on SysNAND), effectively negating the safety of using cheats offline. Moving a hacked save from EmuNAND to SysNAND has the same ban risk as save editing on SysNAND.

The SysNAND CFW method is much faster and doesn't involve restarting the Switch that many times. Both methods are going to have the exact same level of ban risk because both methods achieve the same exact goal of going online with a modified game.

Any steps that involve cheating on EmuNAND but then bringing your save to SysNAND is just time consuming, and confuses other people. There is no real point to doing this. It does not make anything "safer". Using CFW on SysNAND to modify a save and modifying a save on EmuNAND and bringing your save to SysNAND is esentially the same thing. Not to mention the convoluted process of updating your game on EmuNAND!

CFW (Atmosphere, specifically) on SysNAND is not going to cause a ban. However, it can be a good precaution to either remove Wi-fi settings, activate airplane mode, enable 90DNS, or activate Incognito before launching CFW on SysNAND. If you remove Wi-fi entirely or block it with airplane mode, but you still want to get files off your Switch without removing your SD card, an MTP configuration can help.

These tools will treat your Switch similar to a USB stick and allow you to access the SD card's contents without removing it without any network connection.

In Hekate's case, you will have to reboot into Hekate, but it's a lot smoother than using a homebrew 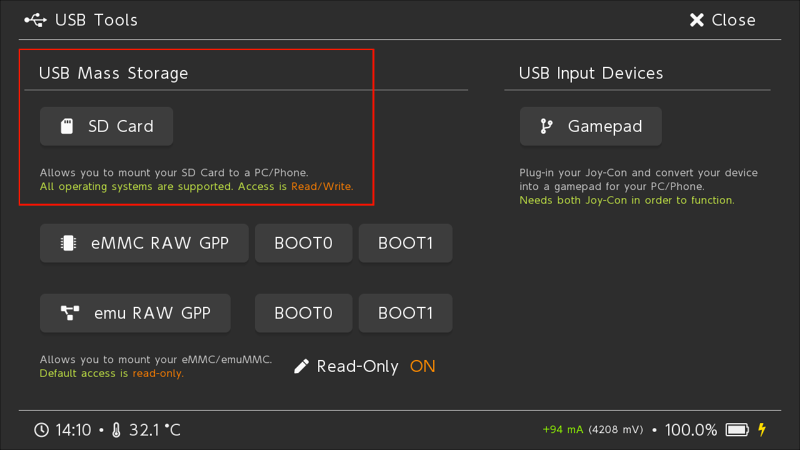